A&R a novel by Bill Flanagan  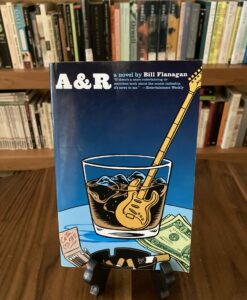 Those who work in Artists and Repertoire sign artists and nurture their recording careers. In a music industry controlled by corporations and increasingly defined by profits and margins, Jim Cantone accepts an offer to become head of A&R at WorldWide Records, an industry giant, but he must navigate a business that seems to pit his passion for art and music against the drive to succeed, to make money, and to deliver music to the widest possible audience. On one side of the equation, Wild Bill DeGaul, WorldWide founder and CEO, capriciously runs the company while pursuing the lust for life that originally led him to the music business. On the other side, J.B. Booth, the Harvard educated lawyer and Vietnam Veteran, works for the influence and wealth a merchant of culture deserves. Cantone struggles to find a middle path.

While watching Peter Bogdanovich’s Tom Petty and the Heartbreakers: Runnin’ Down a Dream, which I highly recommend to anyone who loves rock and roll, Bill Flanagan caught my eye. Throughout the documentary, Flanagan’s comments were intelligent, thoughtful, sensitive, and intriguing. After a quick online search, I happily discovered he was, among other things, a novelist. A&R did not disappoint.

A&R tells the story of a man navigating the difficult terrain between art and commerce. As every artist knows, to survive we must commodify the product of our passion, but the path to commodification is fraught with difficult choices. If one slides a bit too far to the right, we might as well operate a strip club for all the passion left inside. If one slides too far to the left, we work alone, in utter disconnect from the people who would feel what we’ve felt, the very community that gives our work meaning.

Protagonist Jim Cantone, like many if not most of the people who work in publishing, the movie industry, or the music industry, got into the business by chance because of a love for art. The industry, like all business, changed him, and he struggles to negotiate that change.

Flanagan brings a tremendous amount of experience and insight to his novel. He’s navigated multiple sides of the music industry, and he understands the necessity of commercial value and artistic integrity. He understands that an artist gains authority slowly through permission. Corporations, and the media apparatuses they’ve built and control, can fast track the process of gaining authority. All the corporations need are artists and an artistic repertoire to market. Flanagan’s prose explores the dignity of his experience and insight while flowing effortlessly across the page and through the reader’s psyche. His characters manifest types we recognize, but they remain unique, individually drawn, and always redeemable. Even the worst characters, whose deplorable actions have devastating consequences, remain relatable.

Flanagan’s writing has a humanity that makes his words resonate, a humanity born of reflection, contemplation, experience, and understanding.

Bill Flanagan is an author, television executive, and radio host. His books include Written in My Soul, Last of the Moe Haircuts, U2 at the End of the World, and his novels A&R, New Bedlam, Evening’s Empire, and Fifty in Reverse. He has written for Rolling Stone, The New York Times, Esquire, Spy, Men’s Journal, Vanity Fair, GQ, The New Yorker, and The Village Voice.

PrevPreviousIs There Culture Without Stuff and Things?
NextIs There Understanding Without Sensitivity?  Next