The Getaway by Jim Thompson 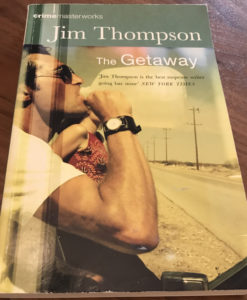 Doc McCoy’s wife Carol conspires for Doc’s release from prison on the condition they rob a bank in Texas with two hoodlums, Rudy and Jackson. After the robbery, the treacherous Rudy kills Jackson, and Doc shoots Rudy. With the police, criminals, and a wounded Rudy on their trail, Doc and Carol flee to Mexico and a mysterious criminal sanctuary.

The Getaway reads like a freight train racing across rails that link betrayals, violence, death, and the occasional wave of modern malaise. The novel rattles the cage of conformity. Ultimately, however, Thompson poses an existential quandary: can we never escape?

Jim Thompson excelled at portraying psychopaths, losers, and vicious professional criminals. His writing maintains an edge that few have matched and none exceeded, but Thompson truly excels when his work is self-aware. Thompson’s characters struggle against society’s paradox: the mutually exclusive values of liberty and equality. His characters are only as bad as society allows them to be. They’re the exceptions that prove the rules.

Once you’ve broken the rules, where do you go?

In this sense, The Getaway provides the experience of fleeing the life of crime, seeking the sanctuary where the criminal ceases to be the sum of his actions. Doc struggles against the reality he’s chosen, the consequences evoked by his crimes, and the relationship he and Carol now share. They’ve passed the point of no return, and the novel takes you one step further.

Jim Thompson (1906-1977) was an American author and screenwriter, a master of the hard-boiled novel. His works include Cropper’s Cabin, After Dark, My Sweet, The Kill-Off, The Killer Inside Me, and The Grifters. Many of his novels were adapted into films. The Getaway was originally directed by Sam Peckinpah and starred Steve McQueen and Ali MacGraw.

*I may earn a small commission on books purchased through affiliate links in this post. I only recommend books, films, or music that have influenced my writing.