The Mad and The Bad by Jean-Patrick Manchette 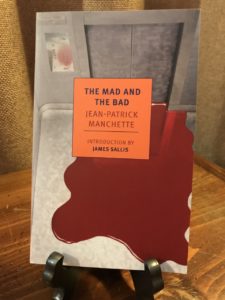 In The Mad and The Bad, Michael Hartog obtained a fortune after the death of his brother in an accident. The fortune, however, came with Peter, Hartog’s orphaned nephew. Hartog hires Julie from an insane asylum to watch his nephew, and Hartog hires Thompson, a gunman with a serious ulcer to kill Julie and Peter, who escape and bring the madhouse with them.

Manchette’s prose provides immediacy, quickness, and depth without sacrificing function. In a handful of paragraphs, Manchette can use dialogue to provide a parody of labor in capitalist society, illustrate the grotesque nature of reality, foreshadow the ineptitude of those “in the know,” and underscore the perspective of those who aren’t.

Manchette’s writing charges forward without a word misplaced. In French, prepositional phrases disappear like the present progressive does in English, so ubiquitous you cease to notice, which gives the prose a liquid quality, a river rushing toward a waterfall climax. In translation, however, Manchette’s prose gains a hitch, like a freight train roaring across carefully laid track, a track filled with political perspective, social awareness, irony, and symbolism.

You may not see yourself in Manchette’s characters, and you may not want to, but you’ll find yourself immersed in his language, so rapid yet detailed you could reach out and touch it as it zips by. Be careful not to burn your fingers.

Jean-Patrick Manchette was a genre-redefining French crime novelist, screenwriter, critic, and translator. His detective fiction was politically engaged and employed social realism. His novels include Fatale, Three to Kill, and The Prone Gunman.

*I may earn a small commission on books purchased through affiliate links in this post. I only recommend books, films, or music that have influenced my writing.