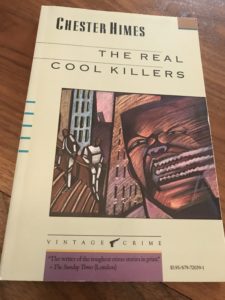 Harlem detectives Grave Digger Jones and Coffin Ed Johnson investigate the murder of Ulysses Galen. When Galen was murdered during a barfight, the murderer fled while chaos ensued. A drunk fired a few rounds into a crowd, and a street gang calling themselves the Real Cool Moslems (teenagers in robes and fake beards) caused a distraction and spirited the drunk away. Grave Digger and Coffin Ed realized the drunk’s gun was a fake but were faced with two mysteries: the murder and the commotion surrounding the murder.

Chester Himes wrote great crime fiction with interesting plots, strong characters, and electric prose. On that basis alone, Himes cemented his place among the best noir authors. Two things, however, separate Himes from the pack: his immediacy and the specificity of his time and place.

Depicting Harlem in the late fifties and sixties in what he referred to as the Harlem Domestic series, Himes infused his novels with a unique cultural awareness that transcends a depiction of race. His novels captured jazz, blues, soul food, cultural cross-pollination, racial tension, social activism, cultural revolution, charismatic religion, police brutality, political corruption, and the sexual underbelly of the city. These novels illustrate how a strong sense of place can infuse a novel and the philosophical implications of a mystery with a unique vitality. Himes wasn’t necessarily depicting a “true” or “accurate” sense of midcentury Harlem. He was, however, purposeful in his depiction. He used a well-known location to structure the reality of his stories and the ideas that organized those stories.

At times both vibrant and dark, The Real Cool Killers contains a macabre humor and many brutal situations. Himes balanced the brutality of the world he depicted with a moral sensibility, an awareness that his detectives are doing their part to protect their world and to bring a killer to justice. Coffin Ed Johnson and Grave Digger Jones protect a deeply imperfect world, and Himes developed those imperfections with such a sharp eye for detail that the reader finds herself enveloped by the immediacy of the writing.

Chester Himes (1909-1984) wrote the Harlem Domestic series, of which The Real Cool Killers is one example, and several other novels and stories including If He Hollers Let Him Go. Himes began writing while in prison. He eventually emigrated to France, where he joined the expatriate literary and artistic community that included Richard Wright, James Baldwin, and Pablo Picasso.

*I may earn a small commission on books purchased through affiliate links in this post. I only recommend books that have influenced my writing.