His Name Was Death by Frederic Brown 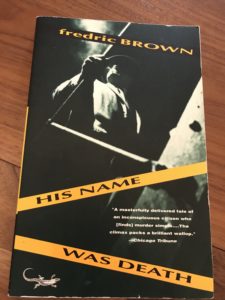 Darius Conn, a forger who’d murdered his wife and gotten away with it, discovers he’s missing counterfeit bills which could bring the police to his door. He must track the bills and cover his tracks, no matter the consequences. The story of a man lost in the labyrinth of his own delusions, His Name Was Death carries the reader through the repercussions of cascading murders. A chilling yet hilarious novel, Brown’s work has psychological depth and thrilling complexity.

Each section of the novel begins with “Her name was” or “His name was” and introduces a character. The section then develops a situation that leads the reader further into the pathology of Darius Conn, mirroring the trail of counterfeit bills Darius seeks.

This novel is a masterwork of the art of the revelation. While moving the story forward through time, Brown leads the reader backward toward consequence. We don’t see the entirety of the situation until the final page, but there’s no slack in the tension the novel creates, a tension built, brick by brick, on the foundation of the reader’s ignorance.

Although we’re kept in the dark, Brown crafts a fully fleshed world filled with details that depict Santa Monica in 1950. The dark is exactly where Brown wants us, only illuminating what we need to see to know where we are, never where we’re going.

Brown’s use of revelation, even the title is taken from The Book of Revelation, transgresses form. His breadcrumbs question the perspective of any killer. How can one presume to take the life of another when they don’t know the perspective of that other? How can we, the reader, judge the killer when we don’t know the whole story? How can justice exist in a world limited by consciousness?

The questions posed by the novel have no easy answers, perhaps no answers at all. They’re questions that undergird the mystery/thriller genre, and they tie that genre to what it means to be human.

*I may earn a small commission on books purchased through affiliate links in this post. I only recommend books that have influenced my writing.